Five Behaviors that Undermine Your Marriage 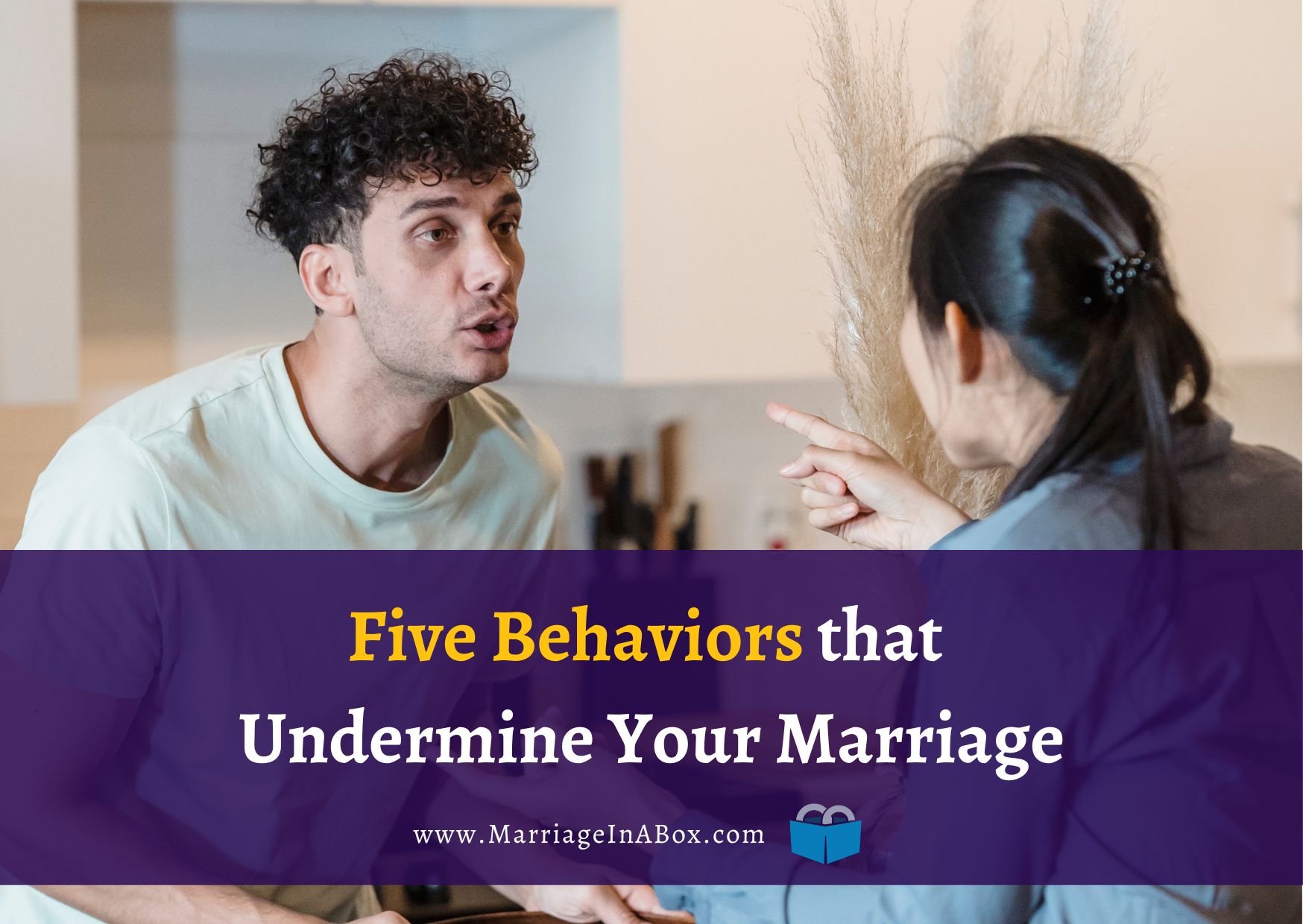 There are healthy communication habits that build up a relationship and those that are unhealthy and can tear down a relationship. Research has shown that when couples utilize criticism, defensiveness, dishonesty, stonewalling, and contempt during difficult moments, they will turn toward each other less and grow distant, and the likelihood of divorce increases. Constant put-downs are a form of emotional abuse and can cause self-esteem problems with those on the receiving end and destroy relationships. This article will discuss these five toxic behaviors and their antidotes.

Negative criticism is very toxic to relationships and can feel like an attack. It has the effect of tearing down rather than building up, affecting self-esteem, and causing stress, anger, and resentment. When someone experiences an attack, the hurt causes an escalation of negative feelings and behaviors and may compel retaliation. A complaint focuses on the problem, while a criticism focuses on character trait flaws. Criticism uses the words "always" or "never" to describe something your partner does or doesn't do. Criticism is different from a complaint. Complaints are a normal and healthy aspect of a relationship and are a way to bring problems to light. A complaint focuses on the issue, and criticism sees the partner's character, personality, or looks at the problem.

Antidote: Bring up the same topic gently, which is a better way to resolve it.

"When I come home from work and see dirty dishes piled in the sink (what you noticed), I feel tired and frustrated (sharing your feelings). I need to walk into a peaceful environment.”

Contempt is the most dangerous of all behaviors because it undermines all reconciling efforts. At a minimum, it is very mean and becomes emotional abuse. It is a significant indicator of divorce. Contempt is supercharged criticism because it takes on a position of superiority, and the interaction becomes uncaring, demeaning, and affectionless. When people have contempt, they can be cynical and express their discontent using shame and mean-spirited sarcasm to put someone down. Some examples of complaint vs. criticism vs. contempt are:

Defensiveness occurs when someone regularly receives criticism and contempt to try and protect themselves. A defensive person is uncomfortable admitting mistakes and shortcomings and may become rigid about their stand. They may turn around to become critical and contemptuous of their partner (give back as they get), or they may try to make excuses for their mistakes to downplay them. The argument is then deflected by changing the topic to the partner's shortcomings and becomes a cycle of never addressed accusations.

Antidote: Take responsibility, even if only for part of the conflict, and try to reach a solution.

Being lied to repeatedly is a red flag that can make it difficult to trust and build a solid foundation in a relationship. Honesty regarding spending, internet or other relationships, and substance use can create cracks in a marriage. Fostering secrecy regarding these issues can create secret lives that keep our partners out.

Lack of emotional honesty involves withholding, denying, or lying about how we feel about our partner, marriage, or ourselves. It is best to be upfront and honest with our partners rather than cover up how we feel.

Antidote: The antidote is to be honest with ourselves and others.

Stonewalling is when someone in the conversation shuts down, goes silent, blocks, and refuses to acknowledge the other person. With stonewalling, it seems like their partner doesn't care about them. The person who uses stonewalling is likely in a state of fight or flight. Stress hormones are then released when the body detects a threat. In conflict, sometimes our bodies will see it as any other threat and release stress hormones, and we will experience a racing heart. The parts of our brain responsible for relational behaviors like problem-solving, humor, and affection shut down.

Antidote: It is impossible to have a productive conversation when someone is in a stress response, so both people in the exchange need to agree to take a break and self-soothe.

Stress hormones will take about twenty minutes to clear out of the bloodstream, and after taking a break, return to the conversation when calm. This return builds trust within the relationship.

Most people will use these negative behaviors at times in relationships. It is crucial to recognize their use and make repairs quickly to work toward utilizing them less and less. If these behaviors become chronic, they can break down a marriage. If you need helpful advice and solutions on how to deal with them, consider Marriage in a Box.

Marriage In a Box is a great resource that gives you access to the simple tools, techniques, and solutions that professional marriage counselors use for typical relationship issues. Marriage coaching is also available on the site. You can set goals and earn rewards. Feel free to check out the available kit and sources of information.

Long-term solutions to the most common relationship struggles.

See how it works